The last 12 minutes that Miley Cyrus merits any discussion

This occurred here, with the additional input of Robert Lee and Juan Davis.

The Emperors of America podcast

A podcast consisting of the illustrious Steve Lee and I, whereupon we discuss many aspects of interest to both the elevated classes and the modern everyman. 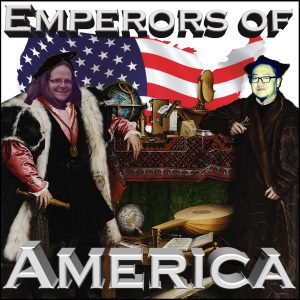 We had so much fun, we split it into two podcasts.

This talking point that I keep seeing attempting to float, that the Democrats are responsible for the shutdown by “not negotiating” is incredibly frustrating to me. It’s so wrong, I almost don’t know where to start. It’s like saying it’s Bob Dylan’s fault the moon is purple.

First of all, weeks ago, in an attempt to forestall the latest round of tantrums in the form of refusing to raise the debt ceiling, the Democrats presented a “clean” debt ceiling bill to the GOP Congress. It was set to meet all of the GOP’s goals besides the ACA. This was in itself a considerable concession that left many Democrats unhappy. Boehner initially said he’d allow a vote on it and expected it to pass. This apparently is the same bill that Boehner is now ***refusing to allow a vote on***.

As no one disputes, the ONLY reasons for the GOP pursuing this shutdown is the ACA, aka “Obamacare”, aka (apparently) the “Islamo-Kenyan-Fascist Death to Christian America and Their Puppies Act of 2013, 666, Booga-Booga!”

Which means that the GOP has created this situation by refusing to accept a law that was:
1) Passed by Senate and Congress, with both parties voting
2) signed into law
3) appealed to and approved by the SCOTUS
4) was not repealed after **41 ATTEMPTS**

So now the GOP Congress is holding the entire government – and the economic wellbeing of our country and potentially the world – hostage, in a hopefully vain attempt to gain the extra-Constitutional power to line-item-veto legally passed laws they decide they don’t like AFTER THEY’VE BEEN PASSED.

The GOP Congress attempting to allow this or that budget item while still denying the ACA, is not negotiation by any reasonable definition. It is flatly and transparently just another attempt to have this same power, of effective line-item-veto.

Who can possibly think it’s a good idea for any Congress of any party to have this power?

No one likes the effects of this shutdown. We should all make sure we’re looking at the actual root causes. Sometimes both parties are equally to blame for something. As you can see from the above, this is not one of those times.