A Eulogy for Steve Ditko

I recently had the privilege of attending an interview with George R. R. Martin. Near the end of the interview session, Martin discussed the great and recently deceased comic book artist Steve Ditko. Just like  the late great Jack Kirby, his fantastic visions shaped characters and gave us amazing vistas to consider. His Dr. Strange was pure psychedelic wonder. 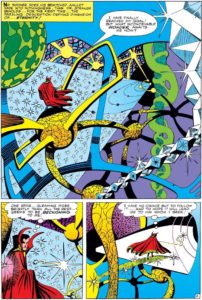 A man with a truly unique vision, even down to functional details like creating the corner box.

As his career advanced, he appeared to come under the influence of an ideological disease: objectivism, the formalized ideology of Ayn Rand. Whatever one’s take on objectivism, Ditko’s interpretation did not seem to serve him well. It apparently led him to increasing difficulties in compromising, which made him less able to actively collaborate with others. This seriously affected him and his career, causing him to leave very successful characters that he created behind and making new opportunities for work increasingly scarce.

I think it’s fair to consider this a lesson for all artists, about being able to bend. No one likes to compromise, but to a certain point it is not only important for careers. One cannot win all points, one is not always right. Creative battles can be fought passionately and then lost by one side or the other. Being able to do this without grudges mean more opportunities for good work.

Regardless of what lessons may or not come from his life his talent was immense, and his amazing work commands respect.

Wherever fantastic worlds you may now visit, Mr. Ditko, may you fare well there in joy.